Enter a query in the search input above.

No results found for your query.

Data Masons is pleased to present our blog series on Blockchain and EDI. Blockchain is quickly becoming less of a buzzword and more of an inevitability in the B2B world as more companies utilize it in their business practices, including in EDI processes. In this post, we'll discuss immutability in Blockchain, and what impact that feature will have on EDI.

With Blockchain, immutability is basically the concept that once data is entered as a block onto the chain, it cannot be changed or altered. In simplest terms, that means no more data fixing. But that doesn’t mean that errors won’t occur.

When we say the data is “unchangeable,” it doesn’t mean that the data is set in stone and sealed, but rather, there is no way to change the data without it being

noticed and having a significant impact on the entire chain.

The unchangeable nature of the Block is due to a function called hashes. Hashes are mathematical functions which turn the data into an output of characters which represents the data on the Block. The hash acts as the fingerprint for the data, and blocks are ordered according to the previous block’s hash. If a hash has been altered, it will break the chain and be easily discovered. If there is an error in the data entered, in order to preserve the integrity of the chain, the user will need to create a new block with the corrected data, rather than changing the already-entered information.

EDI, Business Transactions, and the Error-Prone Nature of the “Throw it Over the Wall” Approach

One big reason this will have a significant impact on the EDI world in general, is that by their nature, business transactions between companies and trading partners are prone to frustrations and errors.

Historically, business transactions which are now covered by EDI, such as purchase orders, invoices, and payments, were exchanged by mail, fax, phone, and computer. In these exchanges, documents were registered in ledgers and replicated in many different forms of storage- from file cabinets to digital media. Each party had their own copies of the transactions.

Think of this model as “throwing it over the wall,” because there’s no immediate feedback when transactions with errors are tendered. This is still the typical manner by which business is conducted today, and there are inherent challenges. If you’ve ever encountered disagreements between transactions, you know it’s a time-consuming headache to fix. For example, if you show an invoice as paid, but your trading partner claims it’s still open, you’ll need to do research, revision, and reconciliation, to name just a few steps.

But why do these errors occur in the first place? Why are transactions between trading partners more prone to them? If you’re working with EDI or your company’s business transactions, you probably already know the answer. Every trading partner has their own requirements, and the more humans are involved in these transactions, the more likely there are to be mistakes. EDI helps, but advances in technology, if they’re leveraged by EDI solutions, will eliminate some of the remaining pains.

If an EDI system utilizes Blockchain, “throwing it over the wall” will not only no longer be an option; it will be obsolete. With Smart Contracts, transactions will be automatically validated before they’re entered. There will be a clear ledger of the transaction that has been approved by multiple nodes, and which shows the history of every step in the transaction and business relationship.

Get Prepared for Blockchain

Blockchain technology is poised to make a large impact on how companies integrate their business interactions today via EDI and API’s. To learn more about how you can make sure your EDI system is ready for the challenges of Blockchain, download our brief or read the other posts in our series on Blockchain and EDI. 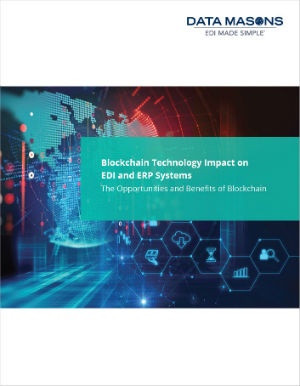 Also in This Series:

Blockchain for EDI: How Secure is It?

Subscribe to Get the Latest from Data Masons in your Inbox